Also known as the Sweet Chestnut or Castan, this species, a native of Southern Europe, was
probably introduced to the British Isles by the Romans who favoured its soft wood for charcoal. A
common species in England by the Middle Ages, it arrived in Ireland during the Elizabethan
Plantations of the 16th century. The tree rarely exceeds 30 metres in height and produces an edible
chestnut. (Turtle Bunbury)

Introduced in Roman times, perhaps like the walnut, for it’s edible fruit (which contains two nuts),
until it was discovered that there was not, in fact, any nutritional value in the fruit!
This shade tolerant tree can live for a very long time.

The timber resembles oak, but has finer rays (than the medullary rays of oak), a closer grain and is
generally slightly paler. The coarse textured wood usually has a straight grain, but sometimes a
spiral pattern is produced. It is more durable than oak because of it’s heterogenous structure.
Though brittle, it is easy to work, can be polished to a smooth finish and is popular with furniture,
coffin & kitchen makers.

The timber is acidic, and can therefore corrode adjacent metals in damp conditions.

It is difficult to dry chestnut evenly, and it can collapse in the kiln

The old wood is rather brittle and shaky and is liable to internal decay; the young wood is elastic
and durable and has been used for the rings of ships’ masts and hoops for tubs.

In the Transactions of the Society of Arts for 1789 can be found an account of the durability of
chestnut used for fence posts: “Posts of chestnut and others of oak had been put down at
Wellington, in Somersetshire, previous to 1745. About 1793, when they had to undergo repair, the
oak posts were found to be unserviceable, but the chestnut were little worn. Accordingly, the oak
ones were replaced by new, and the chestnut allowed to remain. In twenty five years (1788) the
chestnut posts, which had stood twice as long as the oak, were found in much better condition.”

It is stated that young chestnut is superior to young oak for all manner of wood-work that has to
be partly under ground. 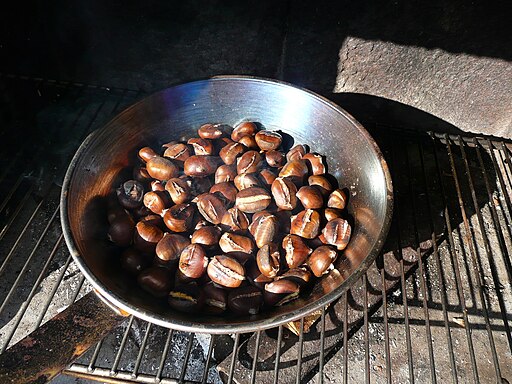 A sweet chestnut carved by English artist Steve Field to commemorate the English Civil War, and depicting Prince Rupert hiding from the Roundheads in the well at Wollescote Hall in Stourbridge, West Midlands.
About the TimberPedia