We have used five different sawmills since we began the Lisnavagh Timber Project in 2001. These include mobile & static saws and circular & band saws.

Mobile sawmills are literally mobile in the sense that they can be hitched up to the back of a car and set up almost anywhere vaguely level, including in woodland, whereas static sawmills are usually housed in a building and are not mobile (although they may have a greater capacity).

Circular saws have a the teeth mounted on a round spinning disc, whereas band saws have teeth on one edge of a metal band.

Over the years, we have found the Wood Mizer sawmill very suitable for most of what we saw here at Lisnavagh. We do not own a sawmill any more, but even when we did this sort of sawmill was far quicker, safer and more flexible than any of the other sawmills we used. This is partly down to the contractor who (so far at least!) has been able to work for us (for a week at a time) at a couple of weeks notice. 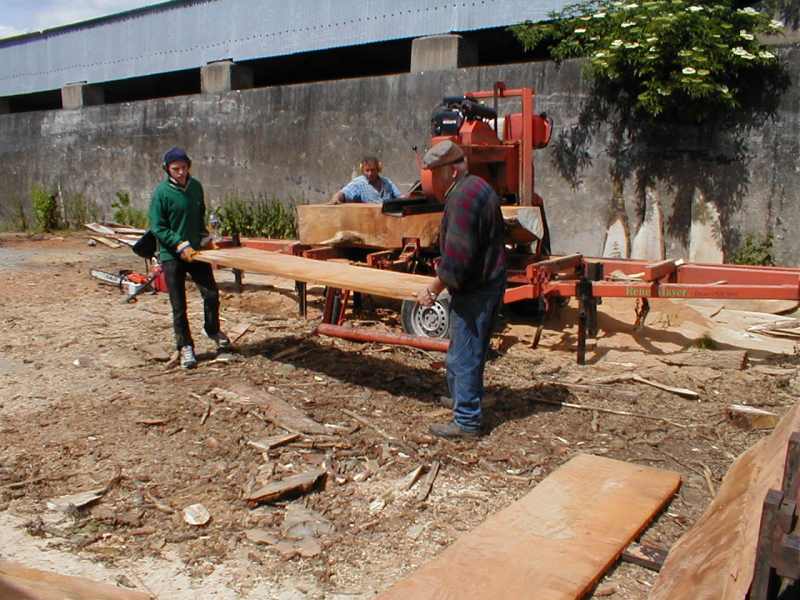 On arrival, it takes about 15 minutes to set up the Wood Mizer and start sawmilling. Depending on the type of logs and cuts required, this sawmill is able to achieve over 200 cubic feet of sawn timber in a day. At the time of writing, we have just finished a week of sawmilling at least 40 tonnes of logs which produced 817 cu ft of boards (Average = 8+ tonnes of logs, or 163 cu ft of timber per day).

The maximum diameter of a log that the Wood Mizer can cope with is 30″ (approx. 760mm). This is not usually a problem, but sometimes some of the most prized logs are bigger than this. Large logs (from old trees, which can contain amazing features in the timber) can be too big for this sawmill. There are two options: Find a bigger sawmill, or split the log into manageable sections with a very large chainsaw. We have done both and find the first option expensive and the second option is wasteful of good timber – so neither is satisfactory! It is unusual, however, but other options are being explored for these extreme cases.

From our point of view, this sawmill is simple and yet very capable. This is not only down to it’s design, but also the experience of the operator. The Wood Mizer is our current choice for a sawmill.

We have also used a larger mobile band saw. This is a more expensive machine to operate, and therefore to hire, but can handle logs of a diameter up to about 40″. 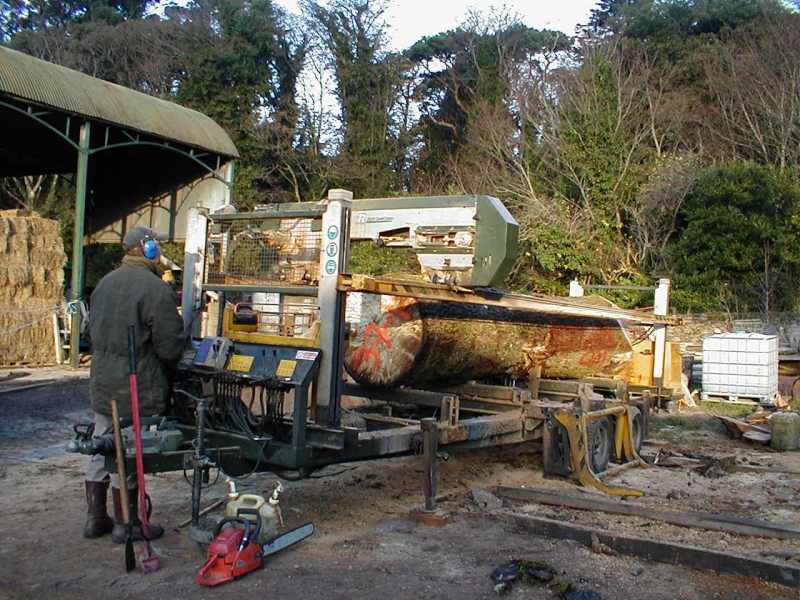 The blade’s cut is usually only about 2 or 3mm, so there is little sawdust or wasted timber. With both of these bandsaws, the blade is mounted and cuts horizontally. The blade has to be sharp though. A blunt blade will tend to ride up over any knots or other hard features and the boards will be uneven in thickness. 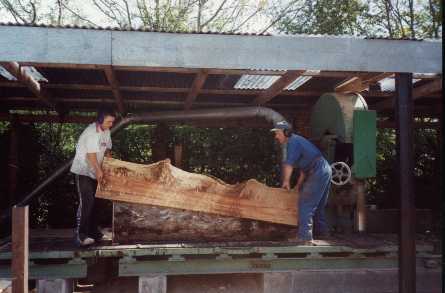 When the Lisnavagh Timber Project was first started in 2001, we made use of a Stenner 48 static bandsaw. This can cut logs up to 4 feet in diameter, which is considerable.

Unlike the mobile sawmills, the Stenner’s blade cuts vertically. It has much wider band than the mobile sawmills, which reduces the tendency for the blade (especially when getting blunt) to wander.The operator of the sawmill is very experienced with hardwoods, and was therefore a very useful source of advice to us in the early days. 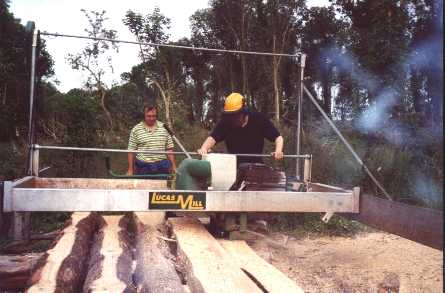 The Lucas Mill was invented in Australia where it became very popular. It is very mobile and can be set up pretty much anywhere, so long as the ground is fairly level.

It has a circular blade which can be rotated through 90 degrees to cut vertically or horizontally. The width of the boards that can be cut is determined by the radius of the blade.

The Lucas Mill could be extremely useful for certain applications, and particularly dissecting large hardwood logs. 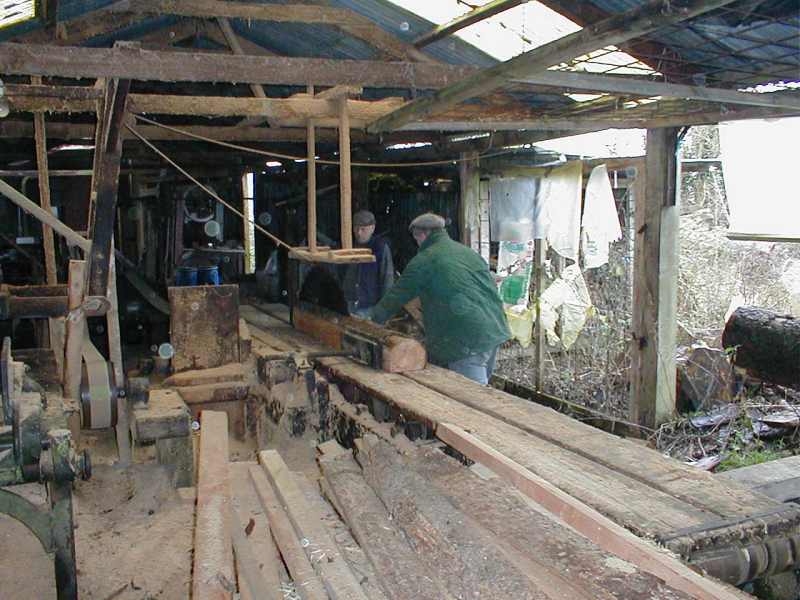 This is our own sawmill at Lisnavagh – or at least it was until 2003 when it was decommissioned and sold to an enthusiastic collector.

We believe that the sawmill was set up in the very early 1900s. The 6hp Blackstone Engine, which powered the sawmill and which was still working perfectly when it was dismantled, was bought and installed in about 1930 and it was a wonderful sight to see it in action. It was a single oil engine with a 6 ft fly wheel.

This was a very old sawmill but it worked extremely well. There were two circular saws – one big and one small – for different scales of sawing. Also within the building were a band saw, planer, mortiser and various other items that were also powered by the Blackstone.

One disadvantage of circular saws over band saws is the amount of sawdust produced. The cut is about 1/4 inch wide, so for every four 1″ thick boards that are sawn, the equivalent of one board has been turned into sawdust. This applies to the Lucas Mill (see above) as well.

The production rate was quite slow – in fact it was the slowest of the five sawmills that we have tried since 2001. So, even when we had our own sawmill, it was more economical to hire in the Wood Mizer! 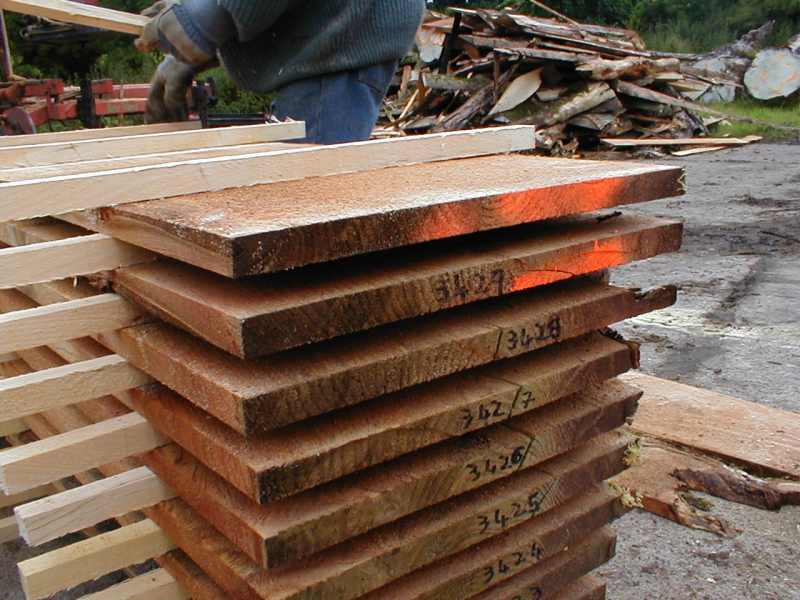 When the boards come off the sawmill, we measure and grade them – every single one. We also give the boards a unique reference number which is written onto the board.

Notes of each board’s width, thickness, length, grade, type of cut, the log/tree that it came from and any other useful details are all listed against the reference number and later entered onto the database.

Timber needs to dry before it can be used for most purposes. This is because, as timber dries out, it shrinks slightly and can twist or warp. (Obviously it would be disastrous to use wet timber in a piece of furniture, or in fact anything that uses any joints of timber, as the timber will dry out, shrink and cause cracks to appear.) The first stage is usually to air dry the boards in a well ventilated shed, or covered area. 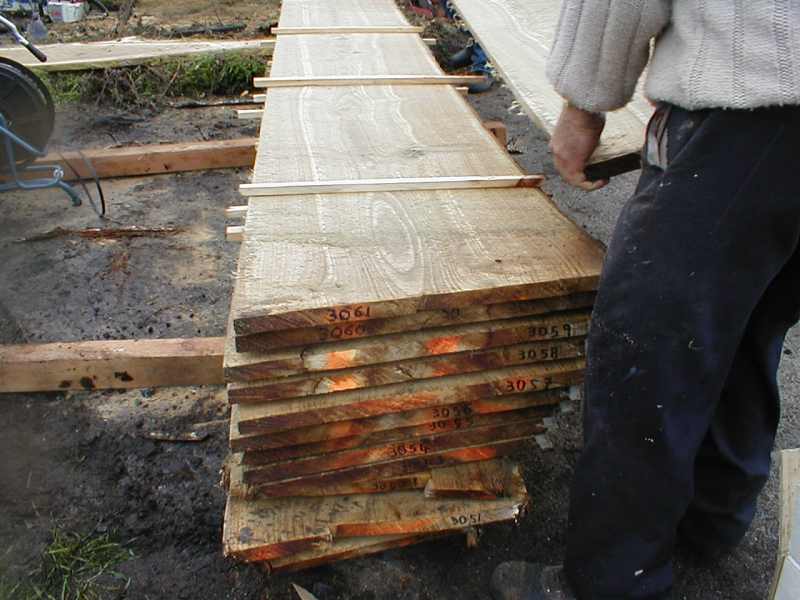 The sawn boards are stacked very carefully. In between the boards, we lay smaller sticks of wood (called “stickers”) across the grain and about 12″ to 18″ apart, depending on the nature of the timber. The stickers allow the air to circulate through the stack of timber, all around each board, and allows the boards to dry at a controlled pace. The stickers must be on top of each other to avoid the boards at the bottom being bent by the weight of the boards above.

Stickers are ideally made of the same species as the timber being stacked, but otherwise we have used aspen, spruce, pine, lime and others. If stickers are made of the wrong species, it can cause “sticker stain” in the timber (dark or light stripes in the timber where the sticker was placed). This is caused by a chemical reaction between the woods, especially when wet. (It is nothing to do with the colour of the woods involved). Stickers must be of the correct thickness to avoid excessively fast or slow drying.

When stacking of boards is complete, the boards are tightly bound together with strapping. This (or weighing the stack down with weights) helps to prevent warping or twisting of the timber as it dries out.

The stack, or bale, is then moved into a shed for air drying. (We use a pallet fork on a digger or a pallet truck for this). The timber stays here until it goes into the kiln, or it sold or used as air dried timber.

The rule of thumb is that it takes “an inch a year” for timber to be air dried to the centre (It has a moisture content of 18 to 22% at this stage.) In other words, a one inch thick board will be air dried, to the centre, in one year. A two inch thick board takes two years, and so on. This does actually vary quite a lot depending on the weather, type of timber, whether the timber is inside or outside, etc.

If the timber is destined for outside use, air dried timber could be sufficiently dry for the purpose. Otherwise, the timber needs to be dried further in a kiln.

This the process of drying timber artificially in a kiln. Kilns can be used to dry “green” timber (i.e. freshly sawn timber) or air dried timber. The moisture content to which the timber is dried depends on the purpose for which it is required.

Generally, a moisture content of 8 to 12% is necessary for any timber that is to be used indoors in Ireland (e.g. furniture, flooring, kitchen units, staircases, etc.). Air drying timber can get moisture contents down to around 17 to 22%, but this is not dry enough for indoor usage.

The reason for this is that the inside of a house, especially with improvements in double glazing and central heating, has a very dry atmosphere. If the moisture content of the timber is too high, it will dry out until the moisture content reaches an equilibrium with it’s surrounding atmosphere (called the Equilibrium Moisture Content – or EMC). While timber dries, it can shrink or warp – leading to a potential disaster! In these situations, properly dried timber is essential. 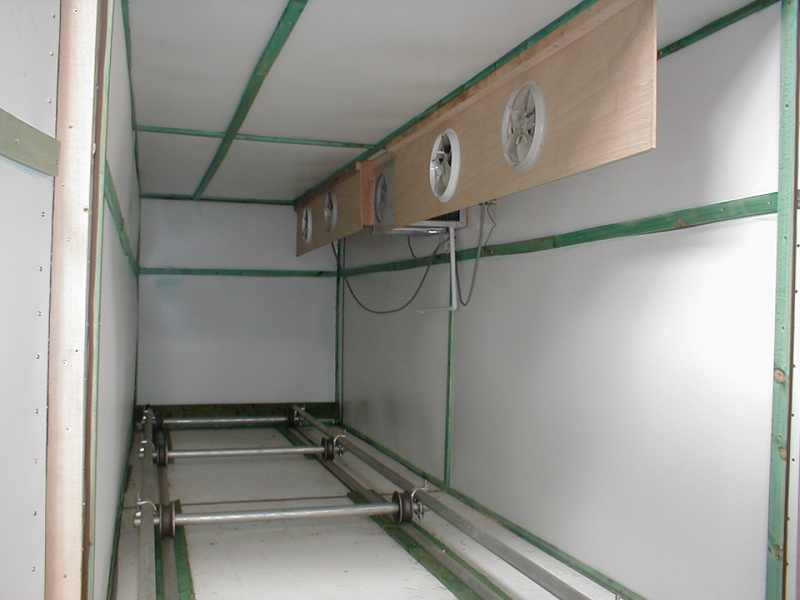 There are a few different types of kiln. We have used dehumidifier type kilns and to date our timber has been dried by contract. However, we completed building a kiln (pictured) and started drying our timber in our own kiln from July 2004. The kiln is, basically, an insulated box, which we built ourselves, with a dehumidifier dryer, heater, fans and control unit provided by Arrowsmiths in the UK. (See www.arrowsmiths.co.uk). Our kiln is 16ft long.

View Next Step: Finishing and Storage 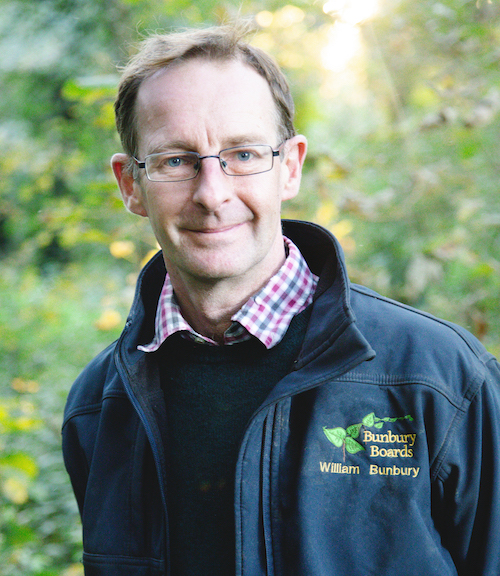