A native of the southeastern extremities of Europe, the horse chestnut is named after an ancient
Turkish remedy for coughing horses. The seeds were said to have curing propensities but,
unfortunately, the seeds are very bitter and horses can’t stand them. The Italians began to
cultivate the plant during the Renaissance and it arrived in Ireland during the 17th century. The
tree’s life rarely exceeds 150 years and is mainly grown for ornamental purposes.

A popular boys game called “Conkers” involves threading chestnuts with a shoelace and banging
them against one another to see which one is the strongest. The word “conker” comes from the
Latin word, concha, for shellfish, in a nod to a similar Roman game played with snail shells. Other
useful tit-bits about conkers; they were used in World War One for the production of acetone and
during World War Two for the manufacture of the explosive, cordite. (Turtle Bunbury)

First introduced to Britain from the Balkans in the late 16th century, it was not until about 200
years later that the fruits of the horse chestnut trees were used to play “conkers”. Before that,
“conkers” were played with hazel or cobnuts or snail shells.

“Conkers” are eaten by deer and cattle and in the past were sometimes ground up as meal to
fatten sheep.

It grows naturally in the moist mountain valleys of parts of Albania and Greece. In the UK, horse
chestnuts have been grown as ornamental trees, particularly in avenues or along roadsides for their
spectacular “candles” of white flowers all over the tree in the spring.

These trees are seen at their best when grown in the open reaching up to 35m (115ft) with the
arching branches normally turned up at the ends. It is one of the largest flowering trees of the
temperate world.

The leaves are large and compound, in the form of a palm with the five or six leaflets spreading out
like the fingers of a fat hand. The leaves fall in autumn to leave large horseshoe-shaped leaf scars
The flowers then give rise to the large globular green spiky fruit. These split open about September
to reveal one to three large shiny, mahogany brown seeds or nuts – the “conkers”.

The pale cream or brown wood is very light, weak and of little economic timber value – it was used
in the past to make artificial limbs because it was light and easy to shape.

In its adopted home in Britain, the horse chestnut grows rapidly on most soils but needs plenty of
space to flourish.

Other species are found in North America where the glossy nuts appearing from the spiny shells
give them the name of “buck-eye” as the chestnuts resemble the eye of a deer.

The pink and red flowered forms are hybrids between the horse chestnut and red American buck-eyes.

A new fruitless cultivar is on the market for situations where the flowers are prized but people do not want small boys throwing sticks and sundry missiles up into the canopy to dislodge the best “conkers” to engage in combat with their peers.

Too soft to merit use as furniture or firewood, but it is a useful wood for carving & turning.

It was also used to make water pipes, charcoal for gunpowder and artificial limbs.

The bark has been employed for dyeing yellow and for tanning, and was formerly in popular repute as a febrifuge and tonic. The powder of the dried nuts was at one time prescribed as a sternutatory (to encourage sneezing) in the Edinburgh Pharmacopoeia. It is stated to form with alum-water a size or cement highly offensive to vermin, and with two parts of wheaten flour the material for a strong bookbinder’s paste. Infusion of horse-chestnuts is found to expel worms from soil, and soon to kill them if they are left in it.

The nuts furthermore have been applied to the manufacture of an oil for burning, cosmetic
preparations and starch, and in Switzerland, France and Ireland, when rasped on ground, to the
bleaching of flax, hemp, silk and wool.

In Geneva horse-chestnuts are largely consumed by grazing stock, a single sheep receiving 2 lb.
crushed morning and evening. Given to cows in moderate quantity, they have been found to
enhance both the yield and flavour of milk. Deer readily eat them, and, after a preliminary steeping
in lime-water, pigs also. For poultry they should be used boiled, and mixed with other nourishment.
The fallen leaves are relished by sheep and deer, and afford a good litter for flock and herds. 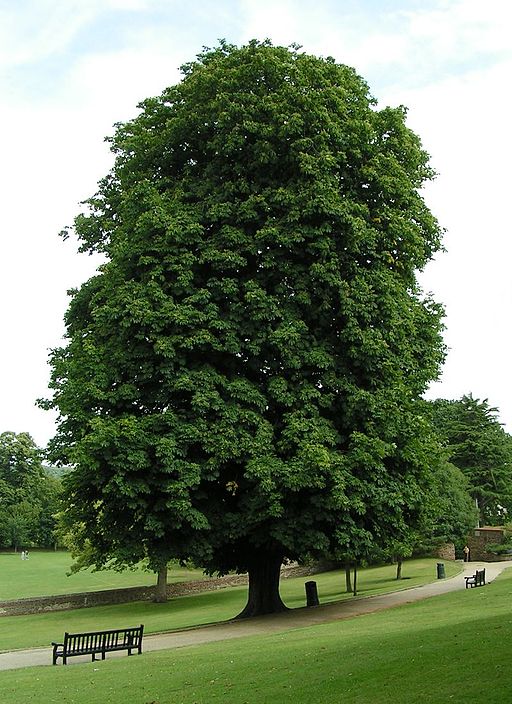 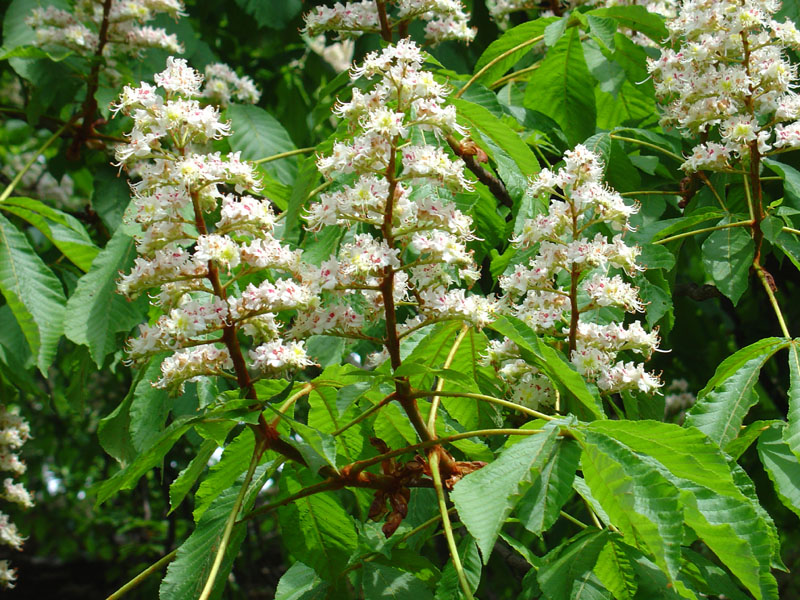 Foliage and flowers
About the TimberPedia