The beech is not indigenous to Ireland and probably arrived here with the Normans during their
conquest of Ireland in the 13th century. The tree rarely lives more than 200 years. Today, beech is
widely planted for hedging and in deciduous woodlands.

Beech trees mature to a great size, 30-40m, with impressive spreading crowns, often branching
almost horizontally. It has shiny grey bark, variegated with dark green and yellow mosses.
Beech grows on a wide range of soil types, acid or basic, provided they are not waterlogged. The
tree canopy casts dense shade, and carpets the ground with dense leaf litter, and the ground flora
beneath may be sparse.

Spalted beech is beech which has had a form of wood coloration occur. The spalting is caused by a
dark fungus growing through the wood, which is the start of the rotting process. While
pigmentation fungi do not degrade the wood cell wall, this type of decay can lead to a reduction in
toughness (amount of energy absorbed before breaking), and increased permeability.

The timber, identical to common beech, is very popular with furniture manufacturers while an eccentric 18th century physician reckoned beech leaves made “much the best and easiest mattresses in the world.” (Turtle Bunbury).

The pale brown hard wood is relatively easily worked. Whitest wood considered to be best
grade.The timber is not suitable for outside use although it is used for piles immersed in water.
The timber is mainly used for furniture making. It has been traditionally used for block planes and
small tools, wooden screws, shovels, bakers’ peels, sabots, sieve rims, frames of saddles and
horses’ collars, cases for drums, felloes of wheels, porringers, salt boxes, spinning wheels, pestles
and herring barrels. Sometimes it can be found stained red to imitate the appearance of mahogany,
and black to look like ebony.

Chips of beech wood are used in the brewing of Budweiser beer as a fining agent. Beech logs are
burned to dry the malts used in some German smoked beers, to give the beers their typical flavor.
As a fuel, beech wood is highly prized; it burns quickly with a clear bright flame, and gives much
heat. 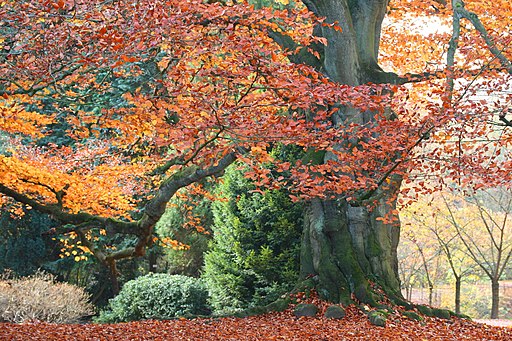 Copper beech in autumn
About the TimberPedia