Ash is one of our tallest native trees and can reach 40m in height in good conditions.

This celebrated native tree has a place in the Irish legends as the most venerated of species, featuring regularly in the Irish sagas as magical shelters for heroes and heroines. Tree-ring evidence suggests they can live for anything up to 300 years. Ash grows abundantly on Lisnavagh’s lime rich soils and provides a beautiful ground flora of bluebells, primroses, lords-and ladies and ferns. (Turtle Bunbury)

“Olive Ash” refers only to the colouring of the wood and not a separate species If the tree develops
a heart, it is not shaped the normal way but shows as dark brown stripes alternating with the
yellowish-white stripes of the other zones. This makes the wood decorative in character, particularly
when the stripes are very regular.

Ash dieback is a serious disease of ash trees caused by the fungal pathogen Chalara fraxinea
(Hymenoscyphus pseudoalbidus). It has spread rapidly across much of Europe from Poland, where
it was first noticed in the 1990s. The disease was first scientifically described in 2006 and can affect
ash trees of any age and in any setting. The disease can be fatal, particularly among younger trees.
The Department of Agriculture, Food and the Marine has confirmed a number of findings of the
disease (Chalara fraxinea) in Ireland during 2012.

The timber is used in the manufacture of furniture, boats and, famously, for the caman or hurley,

the stick used in the game of hurling otherwise known as “Clash of the Ash”.

Fair suitability for carving – it can be inclined to be tough. 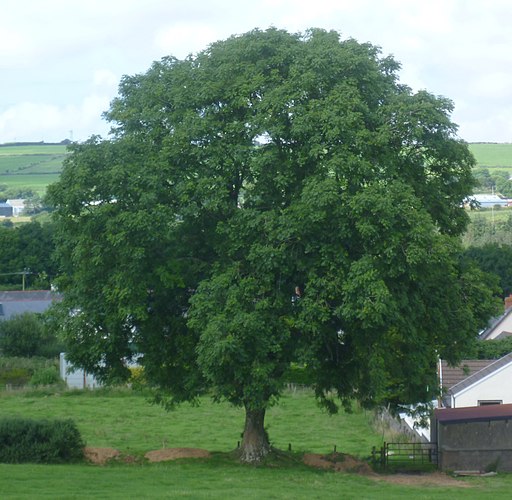 Ash seeds, popularly known as "keys" or "helicopter seeds", are a type of fruit known as a samara