Description: It is a pioneer on many sites, yet it is commonly the climax dominant. Although
western hemlock grows like a weed, its versatility and potential for management make it the
“Cinderella of the Northwest.”

Hemlocks are closely related to spruces ,A highly shade-tolerant species, this tree is often found
under the canopy of much larger trees, foliage of the Western and Eastern Hemlocks is very similar,
and Yew-like in appearance. It has two white lines beneath. The important differences that Eastern
has a line of reversed leaves along the top of the branch so that the white undersides of the leaves
are uppermost.

Branch with mature seed cones that have released their seeds 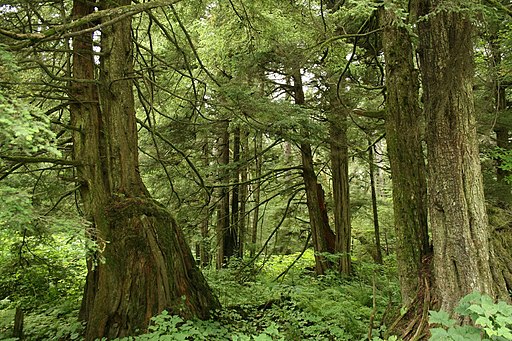 Western hemlock often grows on corase woody debris, such as nurse logs or cut stumps (pictured left)
About the TimberPedia