The common name birch is derived from an old Germanic root, birka, with the proto-Indo-European
root bherƏg, “white, bright; to shine.”

The birch is considered a national tree of Russia, where it used to be worshipped as a goddess
during the Green Week in early June.

Belonging to the genus Betula, there are twenty five species of shrubs and trees of medium size,
confined to the northern hemisphere alone.

Betula pendula(silver) and Betula pubescens(Downey) are the two birch trees native to Ireland.
Downy Birch can be distinguished from Silver Birch in having smooth, downy shoots, which are
hairless and warty in Silver Birch. The bark of the Downy Birch is a dull greyish white, whereas the
Silver Birch has striking white papery bark with black fissures. The leaf margins also differ, finely
serrated in Downy Birch, coarsely double-toothed in Silver Birch.

Birch wood is fine-grained and pale in colour, often with an attractive satin-like sheen. Ripple
figuring may occur, increasing the value of the timber for veneer and furniture-making. Birch wood
is suitable for veneer, and birch ply is among the strongest and most dimensionally-stable
plywoods, although it is unsuitable for exterior use.

Due to birch pulp’s short-fibre qualities, this hardwood can be used to make printing paper. In
India the thin bark coming off in winter was used as writing paper. The paper is known as bhoorj
patra. Bhoorj is the Sanskrit name of tree and patra means paper.

Extracts of birch are used for flavoring or leather oil, and in cosmetics such as soap or shampoo. In
the past, commercial oil of wintergreen was made from the Sweet Birch. Birch tar or Russian Oil,
extracted from birch bark, was used as a lubricant or glue and also for medicinal purposes.

Silver Birch (Betula pendula) is Finland’s national tree. Occasionally one uses leafy, fragrant twigs of
silver birch to gently beat oneself in a sauna. The twigs are called vihta or vasta. This has a
relaxing effect on the muscles.

Birch twigs were bound in a bundle, also called birch, to be used for birching, a form of corporal
punishment.

Many of the First Nations of North America prized the birch for its bark, which due to its light
weight, flexibility, and the ease with which it could be stripped from fallen trees, was often used for
the construction of strong, waterproof but lightweight canoes, bowls, and tipis.

Birch is used as firewood due to its high calorific value per unit weight and unit volume. Birch is
prized by the Sami people as it burns well, without popping, even when frozen and freshly hewn.
The bark is also used in starting fires. The bark will burn very well, even when wet, because of the oils it contains. With care, the bark can be split into very thin sheets that will ignite from even the
smallest of sparks.

Birches also have spiritual importance in several religions, both modern and historical.

Birch ply is made from laminations of birch veneer. It is light but strong and has many other good
properties. Birch ply is used to make guitar amplifiers and speaker cabinets. They are good tonally
and are also known for their sturdiness. Occasionally it is used for electric and acoustic guitar
bodies. It is also used to make drums. They produce boosted high and low frequencies with loud
low end punch that is ideal for studio recordings. Birch ply is used to make longboards
(skateboard), giving it a strong yet flexy ride. It is also used (often in very thin grades with many
laminations) for making model aircraft.

Birch wood is also a common material used in mallets for keyboard percussion. 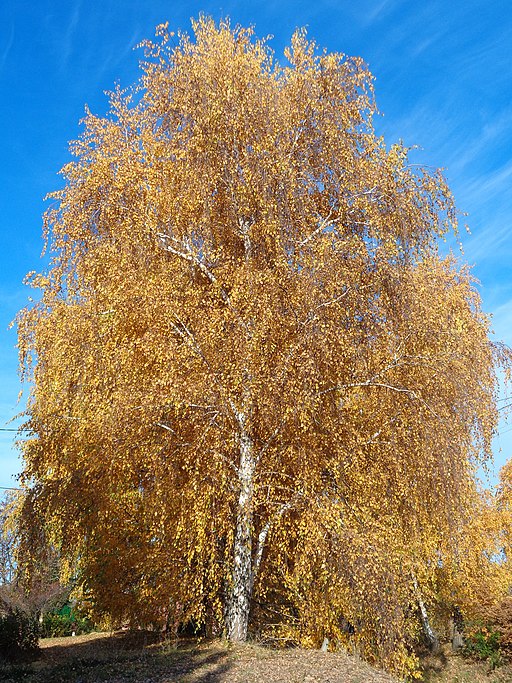 Sawfly larvae feeding on birch leaves
About the TimberPedia